Does this find put Al-Hakim the “ Mad Caliph” back on centre stage? 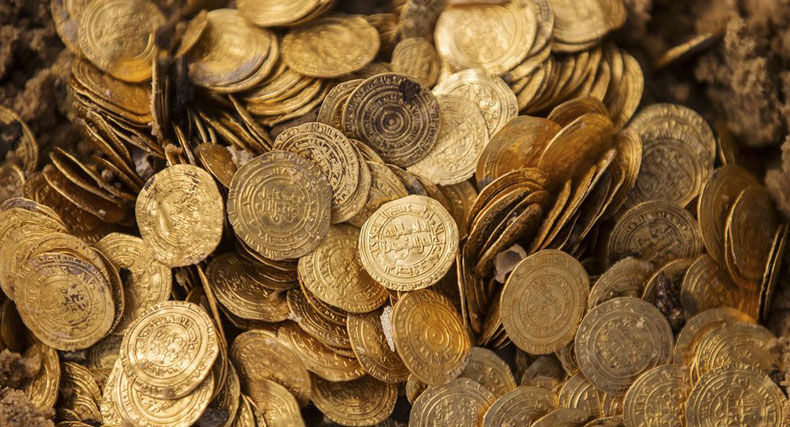 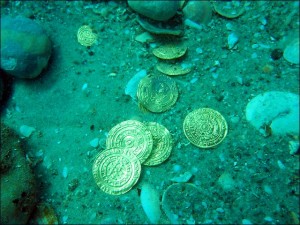 A group of divers recently spotted what they thought was a toy coin in the mud of Caesarea National Park harbour, only to realise that they had stumbled upon a real hoard of gold. The Israel Antiquities Authority quickly recovered nearly 2,000 gold coins in denominations of one dinar, half dinar and a quarter dinar and while thrilling in its own right, this discovery is also a physical insight to the relationships of Christian and Muslim states during the 11th century AD, since most of the coins were minted during the reigns of two Shia Fatimid caliphs based in modern Egypt: Al-Ḥakim who ruled 996–1021 AD and his son Al-Ẓahir who ruled 1021–1036 AD. Al-Ḥakim’s life is a good illustration of the complexities inherent in comprehending “religiously” inspired events defining politics between much of the Islamic world and the Western world today.

Al-Ḥakim was the sixth Fatimid caliph (a North African Islamic dynasty claiming descent from Fatima, daughter of the Prophet Muhammad and Ali, the prophet’s cousin and son-in-law.) This lineage provided opportunity for the Fatimids to claim leadership of much of Shia Islam and Al-Ḥakim was proclaimed 16th Ismaili imam (a community whose current religious and political leader is the Aga Khan.) Al-Ḥakim was also an important figure for the Druze of the Levant whose founder Ad-Darazi proclaimed Al-Ḥakim ‘the incarnation of God’ in 1018 AD (helpfully sticking one in the eye of the ‘Abbasid Caliphs of Baghdad and their claims to universal leadership of all Muslims.) Al-Ḥakim was born in 985 AD in Egypt and succeeded to the throne aged eleven on 14 October 996 AD after his father died during a royal progress through Fatimid Syria. Al-Ḥakim’s most consistent Islamic opponents were the Sunni ‘Abbasid Caliphs in Baghdad, who sought to halt the spread of Shia Ismailism, which they viewed as heresy. Their competition for domination of the Islamic world led to the Baghdad Manifesto of 1011 AD, where the ‘Abbasid Caliph organised tame theologians from both Shia and Sunni traditions to proclaim Al-Ḥakim and his family did not legitimately descend from Ali and Fatima. The Baghdad Manifesto was declaimed in mosques throughout the ‘Abbasid dominions, further accusing the Fatimids of Jewish ancestry and because Al-Hakim was born of a Christian mother, he was also accused of being overly sympathetic to non-Muslims. This is particularly ironic in light of Al-Ḥakim’s reputation in Europe where contemporary polemics described him as the “Mad Caliph” – mostly as a result of the closure of over 2000 churches across North Africa and the Levant during his reign, ending with the destruction of the Church of the Holy Sepulchre, in Jerusalem, in 1009 AD.

At the start of Al-Ḥakim’s reign he did exhibit a relative tolerance towards Jews and Christians in exchange for their prompt payment of the jizya tax, but in 1004 AD decreed that Christians could no longer celebrate Easter and promulgated laws demanding Jews publically wear a wooden calf necklace and Christians an iron cross to identify them in public. On 18th October 1009 AD, Al-Ḥākim ordered the destruction of the Holy Sepulchre, apparently outraged by what he regarded as fraud practiced by monks during the “miraculous” Descent of the Holy Fire, to celebrate the Easter Vigil; only in 1042 AD was the church reconstructed with the permission of Al-Hakim’s son, Al-Ẓahir.

Al-Ḥakim became increasingly ascetic towards the end of his rule and on the night of 13th February 1021 AD, aged 36, he journeyed alone to the hills outside Fustat (modern Cairo) to meditate. He never returned. The next morning only his donkey and bloodstained garments were found and his son Al-Ẓahir (under whose rule the second largest number of coins in the Caeserea hoard were minted) succeeded as Caliph under the regency of Al-Ḥakim’s sister.

Was the Caesarea hoard the salary for the local Fatimid garrison, local taxes heading back to Egypt, or a merchant’s cargo?

We can never know for certain, but intriguingly the 12th century AD geographer Ibn Jubayr (born in Valencia and chronicler of Saladin, the ultimate destroyer of the Fatimid dynasty) wrote that Muslims were required to pay the Fatimid government half their produce at harvest time, in addition to a head tax of one dinar and five carats.*  The mystery surrounding the coins’ origin is by no means their only fascination. That none of the hoard coins come from the ‘Abbassid Islamic world or points further east exemplifies that “Islam” has never being a monolithic entity.

The discovery of the hoard is exciting not only for the sheer thrill of so many perfectly preserved golden coins lurking in the mud for nearly a 1000 years, but also because each of these coins is a little window onto the events of the 11th century AD – a moment in history that is sadly being misused as part-justification for the fanatical horrors currently engulfing the unfortunate peoples of modern Syria and Iraq.

Images:
A picture shows some of the gold coins recently found on the seabed off Israel’s Mediterranean coast in the Israeli town of Caesarea Feb. 18, 2015
The coins laying on he seabed
Al-Hakim bi-Amr Allah (996-1021), sixth Fatimid caliph and 16th Ismaili imam