Heritage Cities of the Baltic: An Overview

THE GEOGRAPHY OF THE BALTICS

From a vantage point somewhere above the North Pole, on a clear day the area we will tour stands out sharply – Tallinn is little over 2000 km from the North Pole. This region is cut through by an endless swathe of northern forests extending from Scandinavia to Siberia to Canada – known as the umbilicus of the world. In Estonia and Latvia, outside the major cities, there is no horizon without forests. In the southern parts of Lithuania, the forests open into broad plains that extend east through the Ukraine in broad flat fertile expanses to the steppes of Russia and Central Asia. As the northern powers – Russia, Sweden, Germany and, on one occasion, France – vied for supremacy over the region, they always faced two enemies: their military foes, and the climate. The gentle topography of this region has lulled many into believing a rapid conquest can be made in the short summer, only to find themselves hemmed in and beaten as winter sets in. We will be journeying in summer when the weather can be surprisingly mild and even hot; yet even then we will see the enduring effects of geography and geology in all four countries visited. 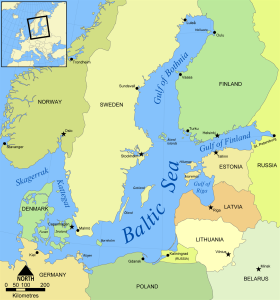 Smaller than its Mediterranean counterpart, the shallow Baltic Sea has joined the histories of its surrounding peoples through conquest, trade and cultural exchange. The Varangian Swedes – better known as Vikings – were the first to link the peoples of the Baltic through trading kingdoms established from the 9th century as far as Novgorod and Kiev in present day Russia and the Ukraine that were connected by river networks to the Black Sea. But Viking expansionism was spent by the 12th century, and the modern history of the Baltic States begins, not with invading ships from the north, but crusading knights from the south.

The Northern Crusades brought Christianity to the Eastern Baltic from the 12th century, when this corner was the last pagan territory in Europe. When Bishop Albert and his Knights of the Sword established the first German fortress at Riga in 1201, he laid the foundation for three centuries of German control of the south Baltic coast. The Knights of the Sword amalgamated with the older and stronger Teutonic Order to form the Livonian Order, centred on the archbishopric of Riga. Meanwhile, Danish crusaders established Tallinn, then sold it to the Livonian Order.

Further North, the Swedish crusaders extended their military might through Finland to the border with Novgorod, brought a degree of Christianity to Finland under the Swedish Empire. The boundaries between these forces were established in the mid 1240s when Prince Alexander of Novgorod defeated both the Swedes and the Teutonic knights and stopped their eastward expansion. This event, celebrated in Eisenstein’s film Alexander Nevsky, created the division between Eastern and Western Europe that has persisted to our day: the Baltic lands have each looked more to the West to develop their distinctive identities, despite various periods of Russian domination. Crusading knights and missionaries were merely the weapons of the most powerful European expansionary force, which was mercantile.

Under threat from pirates and raiders from Sweden, the German trading cities on the Baltic, including Riga and Tallinn, joined to form the Hanseatic League in the late 13th century, adopting in common the ‘Law of Lübeck’, and cooperating in the defense of their merchant shipping. Together the Hanseatic League and the Livonian Order maintained control of the Baltics until the rise of powerful Swedish and Russian monarchies in the 16th century. The Germanic foundations of Riga and Tallinn, visible today in the churches, merchant houses and castles that dominate the old centres of each city, emerged from a loose religious and mercantile empire that extended from Lübeck in the west to Narva in the east and dominated the Baltic sea for much of the Middle Ages.

For centuries the Grand Duchy of Lithuania resisted this incursion of bishops, knights and merchants. Mindaugas united the pagan tribes of Lithuania in the 13th century, and the capital Vilnius was founded by Gediminas in the early 14th century to demonstrate the growing strength and confidence of his Duchy. Lithuania became the last outpost of heathen Europe to survive the onslaught of the crusades, defeating the Livonian Order at the Battle of Saule in 1236. Thereafter the power of the Germanic knights waned, and the Lithuania Duchy expanded until it stretched from the shores of the Baltic to the Black Sea far to the south.

It was not military conquest but a political alliance that brought about Lithuania’s conversion to Christianity in the late 14th century. A 400-year alliance with the Polish kingdom was forged under Grand Duke Jogaila, who oversaw Lithuania’s conversion to Catholicism. The cultural influence of Poland and Eastern Europe has left its distinctive mark on the city of Vilnius, a baroque jewel to rival the cities of the Habsburg Empire. The 16th century witnessed the first printed Lithuanian book (1547), and the founding of the university by Jesuits in 1579. Vilnius became a cosmopolitan city standing on the road between Warsaw and Novgorod, with strong Catholic and Orthodox traditions and a large Jewish community. Byzantine style Orthodox churches remain scattered through its Catholic Baroque streetscapes.

The 16th century also saw the dissolution of the Livonian Order and the emergence of Sweden and Russia as major powers in the Baltic Sea. Riga and northern Latvia came under Swedish control, and the southern region of Courland became a fief of the Polish-Lithuanian empire. Sweden established the second university of its empire in Estonia at Tartu in 1632. This institution has maintained its position as the cultural and intellectual focus of Estonia ever since. However, despite the waning of the Hanseatic League as a European trading power, German cultural and mercantile interests remained strong throughout Latvia and Estonia. The Protestant Reformation transformed religious life, and merchant associations, like the House of the Blackheads in Riga and Tallinn, maintained their control of trade.

Swedish political control of the Baltic States was finally swept away by the emergence of Russia as a major imperial power in Europe under Peter the Great. This great leader began the construction of St Petersburg as his imperial capital and power base on the Baltic in 1703. In 1709 he defeated King Charles XII of Sweden at Poltava. The Peace of Nystad in 1721 ceded control of Estonia and Latvia to the Russian empire, which then gradually expanded to incorporate today’s Lithuania as the Polish-Lithuanian federation was dismantled and Poland cruelly partitioned by the surrounding powers.

This region has witnessed some of the most tumultuous events of the 20th century, particularly the Russian Revolutions of 1905 and 1917 and as vital military fronts in both World Wars. In the aftermath of World War I and the Russian Revolution, these three countries fought for and gained their independence. The three Baltic States were all threatened by the infamous Molotov-Ribbentrop pact of August 1939, when the Soviet Union and Nazi German divided Eastern Europe between their respective spheres of influence and prepared the road to World War II. The Baltic States were unable to resist the Soviet Union’s military pressure and were annexed in 1940, leading to mass deportations and repression. Hitler’s invasion in 1941 then perpetuated further crimes. The Soviet Union returned in 1944 to annex the Baltic States anew. Resistance to this annexation was continuous, if often forced underground, throughout the Soviet years.

The historic cores of Baltic cities, paradoxically, have survived better than those of many western European cities. The USSR had inadequate resources for ‘development’ so the historic centres of Tallinn, Riga and Vilnius remained intact, avoiding ravages of rampant post-war property development that has dogged western Europe. Outside the immediate historical centres, nevertheless, the Soviet regime favoured construction for housing – and huge, poorly constructed and now ramshackle apartment edifices surround the central cities. This construction was often driven by the large influx of workers to the Baltic from other parts of the Soviet Union, attracted by the more advanced industry and the western orientation of the Baltic States; many have remained in the Baltics since the end of the Soviet Union. This has caused political friction between Estonia and Latvia and Russia but there are few signs of domestic ethnic or social tension.

Today, an emerging small local middle class oriented to the West and benefit from membership of the European Union. They share wealth with Soviet apparatchiks transformed into svelte businessmen driving black Mercedes or BMWs. Even though on this tour you will see some vestiges of the Soviet period, the cities visited have been immaculately restored, and are safe, easy to get around and very welcoming.