Landscapes and Cultures of East Coast USA: Shaping each other in the past and into the future 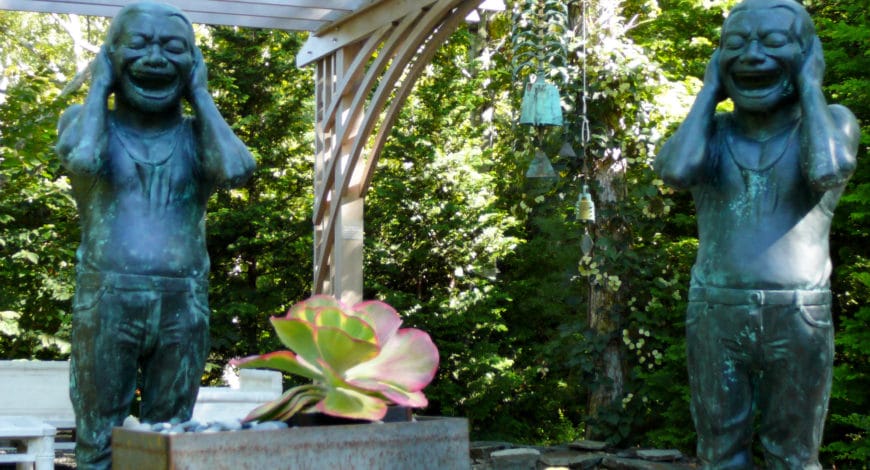 Landscapes and cultures shape each other; like culture, landscapes mould the fabric of our collective being and give us an understanding of our past, as well as presenting possibilities for the future. Gardeners, landscape designers, architects and plant collectors are drawn to the natural world around them; they are compelled to shape it, nurture it, redesign it and bring out its best features to create wonders of beauty. To visit East Coast USA is to experience this merging of culture and landscapes, of past and future.

The extensive Mount Auburn Cemetery is set high on a hill that provides breathtaking views over Boston and Cambridge. As the Americas’ first landscaped cemetery, it was from the beginning the preferred resting place for famous Bostonians. A wander through its golden groves, amongst its gravestones and monuments, stirs recollections of Paris’ Père Lachaise Cemetery, which inspired it. Père Lachaise was the first garden cemetery and, like Mount Auburn, is the resting place of an impressive congregation of influential and talented individuals. Mount Auburn Cemetery was conceived not only as a burial ground but also as an attraction, with landscaped, nineteenth-century-English style gardens, meandering paths, streams, chapels, sculptures, and a considerable variety of horticulture. Like all cemeteries, it holds innumerable stories of the past, and can invite melancholy – but it is also a joyful celebration of all types of life. It has also played a role in the development of conservation practices, embracing new ideas over time. It continues to pursue horticultural experimentation and holds high standards of horticultural maintenance as part of its mission.

A different, equally inspiring blend of natural beauty and human creativity is found at Pineview. This private garden in Peterborough, New Hampshire, is set on 12 acres and consists of more than 40 garden areas connected by staircases and pebbled or grass walkways. They include level spaces and terraced areas designed to accommodate the significant elevation changes on the property. Styles range from formal, near the residence, to less structured, wooded areas. The property hosts a number of water features, including numerous pools and two ponds, and a large perennial garden. A 300-foot sycamore allée, a series of semi circular terraces bordered by standard Korean lilacs, an arboretum, an allée of 110 crabapples bordering an acre garden, and an orchard of 20 fastigiate hornbeams underplanted with European ginger are all distinctive features. Designers Gordon Hayward and Doug Hoerr are among the designers who have collaborated with nature to produce this astonishingly beautiful, diverse garden. 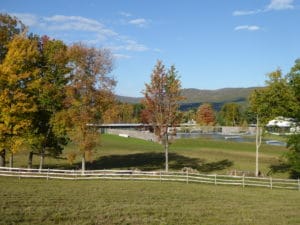 A perfect example of buildings leaning into the landscape is to be found in the north-western corner of Massachusetts, at the Sterling and Francine Clark Art Institute (Stone Hill Centre), Williamstown. The Clark’s 140-acre campus encompasses a landscape of expansive lawns, meadows, and walking trails. A sweeping redesign of the Clark’s 140-acre grounds was begun in 2001 by landscape architecture firm Reed Hilderbrand. This included the creation of a three-tiered reflecting pool; upgrades to and expansion of walking trails; green roof systems; the planting of some 1,000 new trees; and the creation of a new entry drive and landscaped parking areas with water-permeable surfaces that feed into a rainwater and snowmelt collection system. Architect Tadao Ando designed two additions, the enormous Clark Center, and the Lunder Center at Stone Hill, which is envisioned as a sanctuary in the woods, waiting to be discovered. The cutting-edge architecture of the Clark is in fact a staggering repository of cultural heritage; its collection consists of European and American paintings, sculpture, prints, drawings, photographs, and decorative arts from the fourteenth to the early twentieth century. Visitors are treated to works by Old Masters including Hans Memling, Botticelli, Ghirlandaio, Impressionists and Post-Impressionists like Degas, Monet and Toulouse-Lautrec, as well as Turner, Alma-Tadema, and, of course, some of the American greats, including Winslow Homer and John Singer Sargent.

History and landscape also blend with each other at Kykuit, the Rockefellers’ grand estate in Westchester County, New York, with a heavenly outlook over the Hudson River. John D. Rockefeller, Sr. initially entrusted the landscaping of the grounds to the company of Frederick Law Olmsted, which had designed Manhattan’s Central Park. However, Rockefeller was not satisfied with the work and assumed control of the project himself. He transplanted whole mature trees, designed lookouts and the several scenic winding roads. Beaux-Arts architect William Welles Bosworth took up the further design of the gardens in 1906, creating an interwoven series of seven different gardens and decorating them with fountains, pavilions and classical sculpture. Much of Bosworth’s work still exists, although in 1913 the forecourt was redesigned by Charles Platt, who used the Boboli Gardens as a model. The grand stairways, axial terraces and the Oceanus fountain owe their inspiration to the famous Florentine gardens. In the 1930s Arthur Shurcliffe developed the intimate, herbaceous Brook Garden. Bosworth’s original design included a Japanese garden and Meiji-style teahouse; a second teahouse designed by Jungo Yoshimura and George Shimamoto was added in the 1960s. At this time, the terraces were revised and monumental sculptures were incorporated into the landscape.

New York City’s High Line is a scintillating example of the way in which designers can revitalise a disused piece of urban infrastructure and transform into an attractive, green, much-visited public space. It is a 1.45-mile-long elevated linear park, originally inspired by a similar project, the Promenade Plantée, in Paris. The High Line was created on a former New York Central Railroad spur on Manhattan’s west side. Led by landscape architects James Corner Field Operations, the abandoned railway has been reimagined and designed as a ‘living system’ that draws from multiple disciplines including landscape architecture, urban design, and ecology. Since opening in 2009, the High Line has become an icon in contemporary landscape architecture. Its success has inspired other cities in the U.S. and around the world to repurpose obsolete infrastructure, creating new public spaces.

To immerse yourself in any one of these spaces is to experience the way in which landscape architects and gardeners have worked upon and interacted with their environment to create living artworks of extraordinary beauty and enduring cultural value. In a delicate touch of reciprocity, these landscapes have shaped, and continue to shape, North American culture. A part of our collective cultural heritage, they also point us toward the future.