Ivan the Great: The man who made the Kremlin 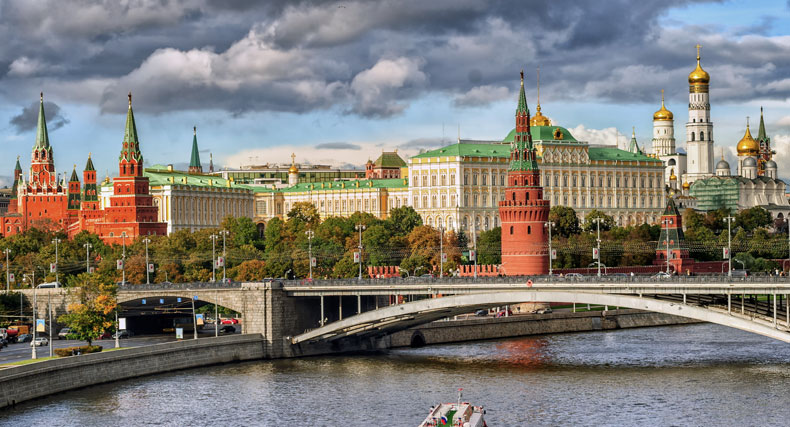 Ivan III (1462-1505) earned his title ‘Great’ by trebling the size of territory ruled from Moscow and ending subjection to the Tartar Golden Horde. Ivan’s ambitions were imperial and to legitimise Moscow’s position as the new Byzantium, in 1472 he chose his second wife, Sofiya Palaeologue, closest surviving heir to the last Byzantine emperor. According to contemporary accounts Sofiya was somewhat Rubenesque and broke the bed on her first night in the Moscow marital chamber; however Ivan was not marrying for lust and Sofiya being intelligent and ambitious, exercised great influence in their 21 year marriage, during which she provided the tsar with 11 children. The Byzantine double-headed eagle and titles including ‘tsar’ (Caesar) and ‘autocrat’ were adopted, which now had a sacred mission to save the Christian world: ‘..for two Romes have fallen, the third (Moscow) stands and there will be no fourth’. 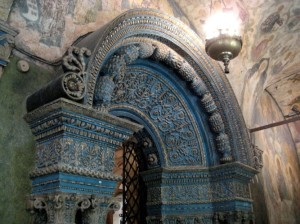 Ivan needed a more imposing stage for his imperial ambitions and influenced by Sofiya, an embassy was sent to Italy to recruit architectural talent, returning in 1475 with Aristotele Fioravanti: architect, artist, hydraulics expert, metal-caster and military engineer (as well as an amusingly-talented magician.) A very generous contract was offered to work in distant, barbarous Russia, but Fioravanti’s decision may well have been influenced by accusations of counterfeiting – for which the penalty was ingesting molten lead. Foiravanti successfully rebuilt the Dormition Cathedral, site of the crowning of Muscovy’s rulers, the first of three Kremlin symbols of Ivan’s divine right to rule.

The second stone symbol commissioned by Ivan was the Cathedral of the Annunciation. Small and intimate, it was a private chapel for the tsar’s family and the work of Russian masters – a perfect jewel-box of colour with a striking mosaic floor inlaid with jasper and agate. Ivan ordered striking changes for his cathedral, adding four domed chapels gilded with loot from his destruction of Novgorod and a new porch in 1471, as he was required to enter the church by a separate entrance having exceeded the Church’s approved number of three consecutive marriages.

Shortly before his death in 1505, Ivan commissioned Venetian Alevisio Lamberti da Montagnana to rebuild the Cathedral of the Archangel Michael. Montagnana reached Moscow as a wedding gift to the tsar from the Crimean khan and his cathedral had an Italianate exterior, with limestone scallop-shells beneath one gold and four silver domes, while the cathedral’s dark, frescoed interior houses the graves of 46 rulers. 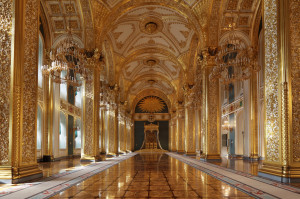 As God was rehoused, so His Servant on earth, and construction of a new palace began in 1487 AD by one Italian, Marco Ruffo, completed by another, Pietro Antonio Solari in 1491. Only the attractive Faceted Palace survives and the architects created a distinctive two-storey structure with Italianate features. The upper chamber was a huge reception hall of 500 square metres and supported by a massive central pillar. Here was a throne-room worthy of a Russian tsar and still used by Putin as an official reception room. The Faceted Palace takes its name from the diamond –pointed limestone main façade; a nod to fashionable contemporary Italian palaces.

The imposing Red Staircase was the palace entrance from Cathedral Square and used only by members of the royal family; it was on this staircase in 1682, 10-year-old Peter the Great witnessed rebellious guards hack his mother’s relatives to death. Napoleon is said to have watched flames consuming Moscow in 1812 from the stair, which was destroyed by the Soviets in 1934 to make way for a canteen and toilets. The Red Staircase was
rebuilt to celebrate Moscow’s (supposed) 850th anniversary in 1997. 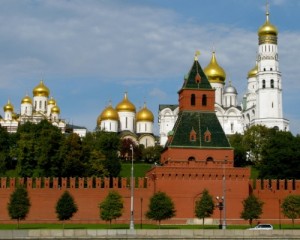 The gleaming-white Bell Tower of Ivan the Great was designed by Bon Fryazin (‘Frank’ the generic Russian name for Italians) with thick walls soaring to 60 metres. Tsar Boris Godunov (1598-1605) raised them a further 20 metres, partly as job creation scheme during a time of economic crisis and partly as elevated notice-board proclaiming his legitimacy as ruler. Testament to Bon Fryazin’s architectural skills, his tower survived Napoleon Bonaparte’s retreating sappers in 1812 AD.

It was clear to Ivan III that medieval walls and towers were poorly-suited to the challenges posed by gunpowder. Work began in 1485 on new walls of heavy red brick, capped with 2 metre tall ‘swallow-tail’ battlements and continued until 1516. The triangular Kremlin was already protected on two flanks by the rivers Neglinnaya and Moscow, so Red Square was constructed as a huge fire-break in front of the third side; in 1508 a gigantic brick-lined moat, 12 metres deep and 40 metres wide, crossed only by a drawbridge, creating an artificial island. Ivan III transformed the Kremlin and by his death in 1505, he’d encircled the spiritual and secular power of his state behind thick intimidating walls: a legacy of autocratic secrecy that still defines modern Russia.