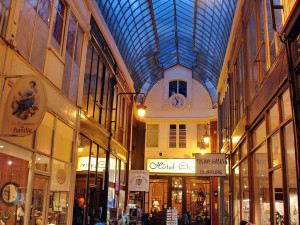 A little while ago, President Donald Trump told an audience that a friend, a long-time Francophile, had informed him that “Paris is no longer Paris.” The president left it up to his audience to figure out why Paris had ceased to be itself. (But the French have a phrase for dog-whistling too; sifflet à chien.) Last time I was there (on a 2016 ASA tour), I heard a woman on the street exclaim “Oh, la la;” and saw a fellow sitting on a park bench breaking chunks off a baguette; surely it doesn’t get more Parisian than that. So Paris, I think, is still Paris.

Of course cities change. My 1955 McGraw Hill guide to Paris tells me that the Pam-Pam Élysées served “Cannibal steaks” and was patronised by “many of the pretty girls” of the grand boulevard. Google maps tells me something very different now; the same address currently houses a franchise peddling exotic teas. At the same time, it’s still possible to stroll through the Passage Jouffroy and see a window filled, like a small forest, with curious canes and walking sticks, just as the surrealist author Louis Aragon described in his 1926 novel Le paysan de Paris. “We’ll always have Paris,” Humphrey Bogart declared in Casablanca; I suppose the real question is the challenge every traveller faces—will we’ll get the Paris we want?

Then again, there are historians who say that there never was a Paris; in her 2002 book Paris: Capital of the World, Patrice Higonnet declared Paris a city of myths. Very effective myths of course—Paris as the city of enlightenment, revolution, literature, art or gastronomy—but more a succession of stories about the primacy of the city than a set of cold, hard facts.

As one of our guides pointed out, there was only a handful of prisoners in the Bastille when the revolutionary mob stormed it on 14 July 1789, and most of them would have preferred to stay put. And a 2013 computerised modelling of revolutionary Paris has revealed the Bastille to be a modestly-sized structure, not the towering fortress of earlier paintings. The latter were “pure propaganda” according to the director of the Carnavalet Museum. “Quelle surprise,” as they say in Paris. The great cities, following Higonnet’s logic, are the ones most adept at telling their stories, most diligent in the tending of their myths and, paradoxically, most able to invoke nostalgia for a past never really experienced. We’ll always have Paris, suggests Higonnet, because we’ll always long for Paris.