Andrew Lemon has enjoyed a distinguished career as a professional historian, specialising in Australian social and cultural history in their British and colonial context. An accessible writer, he believes that the local and particular illuminate the big questions we ask about ourselves and our society.

A recent past president of the Royal Historical Society of Victoria, Andrew was honoured as a Member of the Order of Australia for services to community history and the racing industry.

Andrew’s historical expertise goes far beyond racing. He has written innumerable articles and sixteen major books, winning literary prizes. His topics range from local history, schools and education to biography and Australia’s worst shipwreck. His Master Gardener (2018), longlisted for Sydney’s Nib Literary Award, explores the life of T.R. Garnett, headmaster, nature writer and creator of the renowned Garden of St Erth. Andrew’s degrees in History and English Literature were augmented by his 2004 Doctorate of Letters from the University of Melbourne recognising the body of his published work.

His three-volume social and political history of Australian thoroughbred racing, completed over two decades, is a monumental achievement. This work made Dr Lemon a key authority on racing, giving him unexpected insights into Australian cultural history, including the importance of regional difference. He collaborated during the 1980s as historian with Victoria’s State Artist, Harold Freedman and studio, creating the History of Racing Mural at Flemington Racecourse. He is a Melbourne Cup Tour ambassador for the Victoria Racing Club, travelling annually throughout Australia with the art deco gold trophy, speaking of its history. He has even slept with the Cup under his bed for safekeeping at country venues!

Andrew is a highly skilled public speaker, in demand from radio stations, historical societies, U3A and community groups. As well as being a professional historian, he is a volunteer par excellence. In the 1970s he helped create a professional body for archivists, editing its journal. He helped inaugurate the History Institute, Victoria, was president of the Friends of the State Library, and served on the Board of the State Library of Victoria and on the Heritage Council, Victoria.

Andrew edited the Victorian Historical Journal for a decade. He continues his work for the RHSV by devising the events programme and acting as MC at its monthly meetings. His latest work, a historical novel The Pebbled Beach at Pentecost was published by Australian Scholarly Publishing in Melbourne in 2021.

Numerous including contributions to The Track (ABC 2000) and Who Do You Think You Are (SBS, 2 episodes) 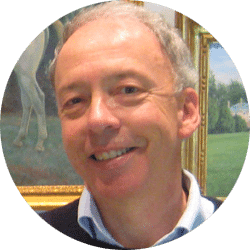