Poland: Remnants of a Great Empire 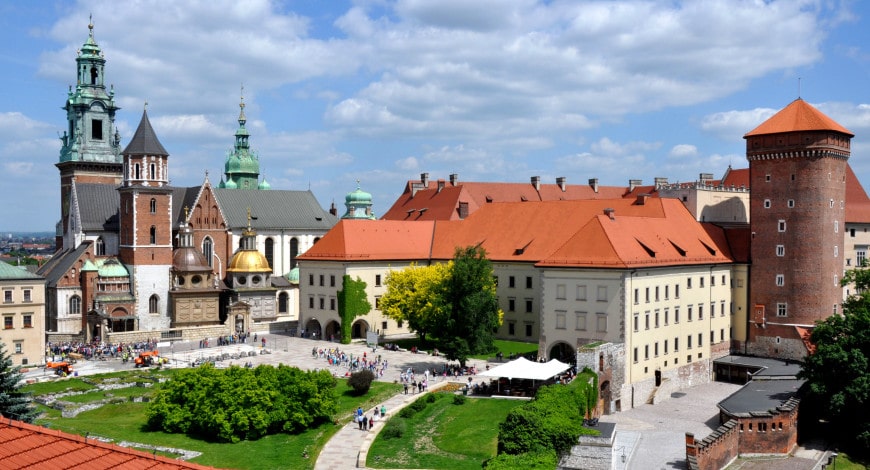 In different political forms from 1386 to the late 18th century, Poland-Lithuania constituted one of the most powerful entities in Eurasia, with territories at times stretching from the Baltic Sea to the Dniepr River close to its Black Sea mouth near Yalta. 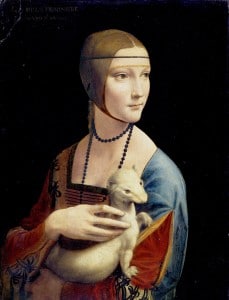 Poland-Lithuania, enriched in particular by grain exports to hungry Western and Southern Europe, produced a lustrous architectural culture. This was seen especially in the old capital Kraków, that, unlike Warsaw, was spared the ravages of World War II. Founded in the 7th century, this fine city was capital of the Kingdom of Poland from 1038 until it ceded this status to Warsaw in 1569. Kraków boasts a superb Gothic, Renaissance and Baroque architectural culture

Clustered on Wawel Hill above the merchant city are the various sections of the royal residence, Wawel Castle, and the lustrous Royal Archcathedral Basilica of Saints Stanislaus and Wenceslaus. Founded in the 11th century, this fine church is compose of Romanesque, Gothic, Renaissance and Baroque elements. Its masterpieces are its incredibly rich royal tombs. The great treasure of the castle, on the other hand, is Leonardo’s Lady with an Ermine (1489-90), a portrait of Cecilia Gallerani, the mistress of Ludovico Sforza, Duke of Milan; it was acquired by the Polish Prince Adam Jerzy Czartoryski in 1798.

Among Kraków’s other architectural masterpieces are Gothic St. Mary’s Basilica (c.1347) and Town Hall Tower (c.1300) and its Renaissance Cloth Hall, all in the Main Market Square. This square was the centre of the city’s commercial activity and during raków’s so-called golden age (15th/16th c.), exotic imports from the east (spices, silk, leather and wax) and exports such as textiles, lead, and salt from the nearby, vast Wieliczka Salt Mine, passed through the Cloth Hall. 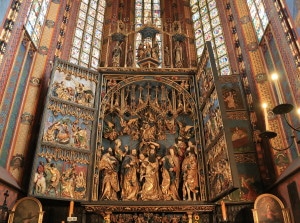 The lime, larch and oak altarpiece was completed in 1489, the largest triptych of its time; a substantial workshop including specialised painters and gilders was required to create this masterpiece. On weekdays, just before noon, the great triptych is opened to reveal the startlingly brilliant central panel of the Dormition and Assumption of the Virgin with carved side panels representing the Annunciation, Nativity, Adoration of the Magi, Resurrection, Ascension and Pentecost.

Kraków, Warsaw, Torun (Copernicus’ city) and the great Hanseatic port of Gdansk, all lie on Poland’s longest river, the Vistula. Traders since the Vikings have used this riverine highway to carry goods in and out of the heart of Eastern Europe; the Vikings dragged their longboats from Poland’s great rivers to the heads of those issuing into the Black Sea in order to trade with the capital of the Byzantine Empire, Constantinople.

Gdansk (German: Danzig) became famous in recent times for the founding of Solidarity (Solidarność) in its shipyards in September 1980, and the group’s subsequent contribution to the dissolution of the USSR.Gdansk, like Warsaw, suffered great destruction during World War II but, like the capital, was in parts meticulously restored in the post-war period. Today, of special note are the fascinating medieval crane on the waterfront and the exquisite streetscape of Long Market, the spine of the old city. Lining this street are lovely 16th-, 17th- and 18th-century buildings, including finely proportioned urban palaces, the 16th-century Town Hall with its tall tower and the nearby Neptune’s Fountain (1617). Nearby also is the Artus Court, founded in 1350 and rebuilt by the architect Abraham van den Blocke in 1616-1618. Named after the legendary King Arthur, it served as the meeting place for merchants and the centre of the city’s social life. Its richly decorated interior includes large murals and an extraordinary illusionistic painted ceiling, as well as coloured statuary and large ship models.

One of the hidden treasures of Gdansk is the German painter Hans Memling’s lustrous, intricate Last Judgement (1467-1471) in Gdansk’s National Museum. This large, brilliantly coloured altarpiece was commissioned by Angelo Tani, an agent of the Medici at Bruges, but was captured at sea by Paul Beneke, a privateer from Gdansk. Beneke’s privateering adventures were typical of a time when lines were blurred between piracy and commercial activity. Captains could move seamlessly between legitimate maritime trade and the plunder of foreign shipping; they were certainly not outlaws living and acting outside the bounds of ‘civilisation’ like Caribbean pirates of Jack Sparrow’s ilk.

Hans Memling (1430-1494) was a pupil of Rogier van der Weyden (c. 1400-1464), and his triptych resembles the latter’s famous Last Judgement (c. 1445-50), commissioned by Nicolas Rolin for the Hospices Dieu (hospital/hospice) in Beaune, Burgundy. The central panel of Memling’s work, like the Beaune altarpiece, is dominated by the figure of Christ in judgement surrounded by Mary, St John and the Apostles and, below him, St Michael weighing souls; the poses and figure types of Christ and Michael are remarkably similar, although in Beaune Michael is dressed as a Deacon whereas in Gdansk he is in armour. The outer panels of both triptychs carry on one side the elect welcomed into the Heavenly Jerusalem and on the other the ravages of Hell. Although inspired by its precursor, Memling’s work is far more elaborate. Whereas van der Weyden pares his scene down to its essentials, depicted in a shallow field, Memling takes the viewer on a journey through his painting, its full import only realised when all its intricate, finely painted, richly coloured details are registered and absorbed.