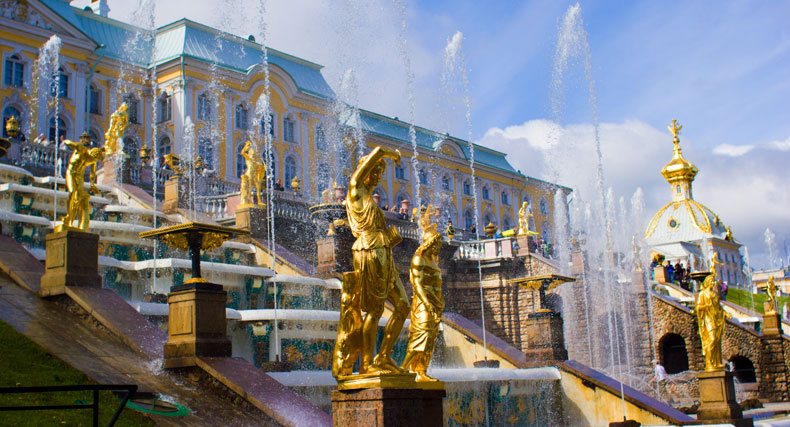 Peterhof, St Petersburg - Christopher Wood. Peterhof had been the summer residence of Peter the Great but was greatly expanded by Rastrelli, the Italian architect of the Hermitage and Pushkin.

Orlando Figes, in his book Natasha’s Dance, A Cultural History of Russia charts the search by 19th century artists for Russian national identity, for the ‘soul of Russia’. In War and Peace, Natasha, a young aristocrat, performs a peasant dance that she could not possibly have learned. Her ‘intuitive’ movements symbolise Russian 19th century aristocrats’ reactions against the ‘westernisation’ of Russian taste in the preceding century. In the early 18th century Peter the Great had revolutionised his country by steering it away from its old, inward looking self to embrace Western Europe. Unlike ‘Russian’ Moscow, his ideal ‘European’ city, St Petersburg, expressed this new orientation through its grandiose prospects and delightful Dutch and Italian Baroque and French Neo Classical architecture; albeit enlivened with a traditional Russian love of colour. Introducing reactions of 19th century novelists like Leo Tolstoy and musicians like Modest Mussorgsky against Peter’s westernisation of Russia, Figes states…

Russia invites the cultural historian to probe below the surface of artistic appearance. For the past two hundred years the arts in Russia have served as an arena for political, philosophical and religious debate in the absence of a parliament or a free press. As Tolstoy wrote in ‘A Few Words on War and Peace’ (1868), the great artistic prose works of the Russian tradition were not novels in the European sense. They were huge poetic structures for symbolic contemplation, not unlike icons, laboratories in which to test ideas; and, like science or religion, they were animated by the search for truth. The overarching subject of all these works was Russia – its character, its history, its customs and conventions, its spiritual essence and its destiny. In a way that was extraordinary, if not unique to Russia, the country’s artistic energy was almost wholly given to the quest to grasp the idea of its nationality. Nowhere has the artist been more burdened with the task of moral leadership and national prophecy, nor more feared and persecuted by the state.

This tour travels to Moscow, Novgorod, and St Petersburg. It uses the heroic 19th century search for ‘the Russian soul’ – evinced by the literary and musical masterpieces whose Romantic power has touched so many of us – as a lens through which to explore Russia’s bifurcation between deep local tradition and more recent westernisation. It spends six days in Moscow, whose vast Kremlin, fortified monasteries (Sergiev Posad; Novodevichy Convent), and superb icons in the Tretyakov Museum reflect the old Russia that emerged in 10th century Kiev. On Kievan Rus’ collapse Russian culture was shaped by the Mongol hegemony and the Ryurikid and Romanov dynasties’ struggle for Russian autonomy and Muscovite supremacy over rivals like Novgorod. Although Mongol power was thrown off, Russia had nevertheless absorbed many eastern influences that until Peter the Great’s revolution sat alongside the deeply conservative rituals and cultural traditions of the Russian Church. This is the ‘indigenous’ culture that was revived in the 19th century search for the ‘Russian soul’.

At Moscow’s Kremlin we encounter an architectural and urbanistic program stretching from the city’s rise to prominence to the present day, and a cluster of cathedrals whose golden interiors form a dazzling example of the way that art and power coalesced under Moscow’s Grand Princes. The Kremlin Armoury houses a striking array of court regalia (crowns, coronation robes and thrones, etc.), carriages and other tsarist treasures reflecting the incredible ostentation with which the Russian dynasties marked their status. The museum also houses a fine Fabergé collection.

In the Tretyakov Gallery, you will learn to ‘read’ traditional icons, brilliantly-coloured images whose meanings differ markedly from western narrative paintings. We shall explore the history of icon painting also in the magnificent iconostases (icon stands), brilliantly-coloured barriers between worshippers and the apses of Russian churches.

The powerful struggle between Muscovite tradition and Peter’s cosmopolitanism that reached its climax in the 18th and 19th centuries was manifest earlier in subtle ways in the Medieval city of Novgorod. Unlike contemporary Kiev, Novgorod interacted sporadically with the West. In Novgorod we explore the evolution of Russian Orthodox church architecture from Byzantine models, and also the development of the fortress complexes (kremlins) which reached its zenith in Moscow’s Kremlin. But in Novgorod we also encounter beautiful small gabled churches, evidence of western influences carried east by merchants the Hanseatic League, of which Novgorod was a distant member. Outside this city, on the other hand, we visit a fascinating museum of Russian wooden architecture, evidence both of Russia’s deep peasant past – where one might imagine Natasha dancing – and of Communism’s desire to celebrate folk culture, showing that even this radical experiment in 20th century political and social organization was also preoccupied with ‘the Russian soul’.

In Peter the Great’s new capital, St Petersburg, we shall see his westernising revolution at work in urban design, architecture, art and gardening. We shall visit a number of major palaces and other monuments from the time of its founder and his successors, Anna, Elizabeth and Catherine the Great. Outside St Petersburg we visit magnificent Romanov summer residences: Peterhof, the Catherine Palace at Tsarskoye Selo (Pushkin), and Pavlovsk. One St Petersburg monument, the Church of the Spilled Blood, provides a discordant contrast in this ‘western’ city; the 19th century Church is a powerful essay in Russian eastern revival. The program also includes visits to the Hermitage, including the gallery’s superb 19th and 20th century French collections.

In the 20th century Russia entered into one of the most radical and daring political and social experiments in human history. Was Bolshevism, and Stalin’s regime in particular, so very different from the autocracy of the tsars? This fascinating question will be addressed on the tour that investigates the iconography of power during the Communist era, the transition to post-Communist Russia, and the effects of these developments upon the Russian people.