From vibrant colours and exotic aromas in the souqs of Tineghir and Marrakesh, to hypnotic music of Berber Sufis in the High Atlas, Morocco is a feast for all the senses.

SEE your way through the labyrinthine souqs of the Marrakesh medina. Day or night, the main square is packed with colour; from snake charmers and acrobats, to palm-readers and street vendors selling delicious food. Watch the sun rise over the Sahara at Merzouga, turning dunes from inky-black, through copper, pinkish-bronze, to bright, rich gold. Feast your eyes on the rich turquoise tiles of the medieval Sahrij Madrasa in Fes: a myriad of blue reflecting a clear African sky.

HEAR the chant of history when the azan sings the muezzin. He calls the faithful to prayer five times a day, his voice echoing over the stunning, Andalusian city of Tétouan and chaotic, vibrant, Fes, Rabat and Marrakesh. A timpani clatter of donkeys’ hooves and rattling carts on the narrow streets of Berber villages are a timeless sound of life in the High Atlas. The musical ebb and flow of Arabic, Tamazight, and French encapsulate the last 1000 years in every souq, mosque, riad and mountain village. The rhythmic hammering of brass-workers in Ouarzazate and silversmiths of Tineghir are counterpointed by the hypnotic chants of sacred Sufi music pouring out of taxi windows, filling the air with 99 names of God. 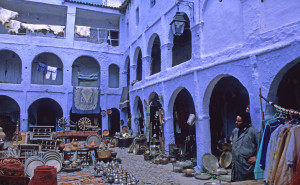 SMELL in Morocco is alluring and overwhelming: a heady mix of spices, roasting meat on charcoal grills, earthy henna on the hands of brides, the tang of leather, the crisp scent of cedar in the mountains at Midelt, iodine and petrol in Tangier, orange blossom and tart lemon everywhere, and nutty richness of argan oil in Essaouira. All are Morocco.

TASTE history on your plate. Berber tribes of mountains, deserts and Atlantic coast, combined fresh fruits, fish, vegetables and meats, marinated in spices brought by Africans, Phoenicians, Romans, Arabs, Portuguese and French merchants and colonists. They combine into one of the finest cuisines in the world. Local people, whether Arab or Berber, hold food in the highest regard, believing that sharing a meal honours visitors, friends and family alike. 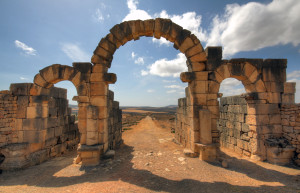 TOUCH the columns and steps of the Roman Capitol, basilica and bathhouses of Volubilis, where generals, magistrates and merchants governed and traded from the farthest southwestern frontier of their great empire. Gently stroke rough indigo walls in Chefchaouen: a tangible presence of a Jewish heritage, millennia old. Run soft wool-tassles through your fingers, while merchants unroll gorgeous Berber carpets in the souq of Tétouan. Trickle gentle Saharan sand at Merzouga and imagine the harshness of a sandstorm, blasting all awareness into the empty desert. Feel the spray of cool fresh water cascading down Tudgha Gorge, bringing life and hope.

Morocco is where senses harmonise in a symphony of bright colours, delicious tastes, rich scents, and tactile surfaces, some elegantly worked and some roughly rugged. All, though, are Morocco.