The Pattern of Oman’s History and Culture 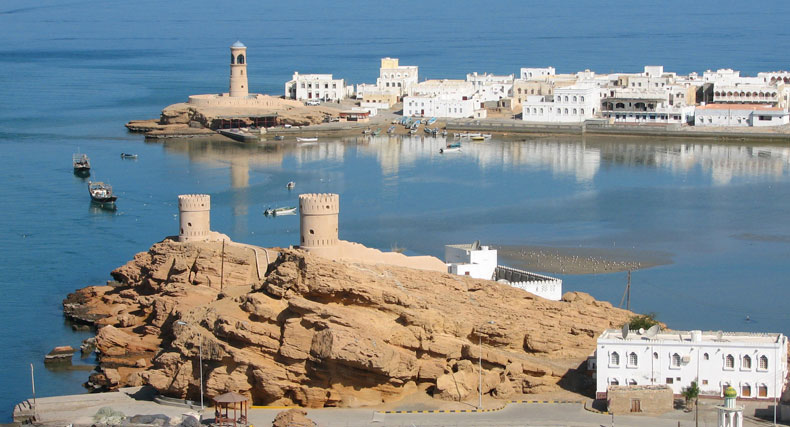 Sur, Oman. One of the greatest medieval ports in the Middle East, the strategic location of Sur enabled ships to make use of the north-east monsoon to reach East Africa. Ships would leave Sur and other Omani ports in November and reach Zanzibar, the main port-of-call around mid-February. The return voyage, before the south-west monsoon, would see them back in Oman by early May.

The State of Oman occupies approximately 212,000 square kilometers of the southeastern quarter of the Arabian Peninsula. It has a varied topography: approximately 82% is made up of desert and deep valleys whilst 15% is occupied by mountain ranges and 3% by coastal plains. Its coastline is rugged but has some excellent harbours. Oman is flanked by sea and desert. To the north and east are the Gulf of Oman – part of the Persian Gulf – and the Arabian Sea. To the west and south is the Rub al Khali, the empty quarter of Saudi Arabia, which isolates it from the rest of Arabia. Isolation is also a feature of the country’s interior, which is cut off from the coastal strip by the Al Hajar Mountains. These geographical and topographical factors have combined to give Oman’s history its particular shape and rhythm. Deserts and mountains have divided the country politically at times, whilst the Rub al Khali and the strategic location of Oman’s coastline have inhibited land travel whilst promoting maritime trade. Whilst the desert separates Oman from the world, the sea has linked it to Mesopotamia, Iran and India, also to East Africa and Zanzibar. Thus, for much of its history, Oman has participated in a global trade network, both as a vital entrepôt and as a supplier of luxuries such as incense to Ancient Egypt and the Roman Empire and Christian Europe, pearls to India and Iran, and, in the twentieth century, oil to the world. Oman’s importance in the three millennia before Christ is amply demonstrated by an extraordinary group of ancient archaeological sites that you will visit.

Economic historians have often noted that places that thrive from trade are strategically located between major trade zones. Oman’s strategic position between the mouth of the Persian Gulf and on the Arabian Sea made it a very desirable entrepôt. In the ancient period it was a vital frontier between the great empires of Mesopotamia and Egypt. Its situation across the gulf from Persia made it a target of the Parthians and the Sasanians. When the last great Persian Empire fell to the armies of the new religion, Islam, Oman’s fate came to be tied to Umayyad Damascus and, after 750, Abbasid Baghdad. The growth of a vast Islamic trade empire benefited Omani traders, who exploited Oman’s location to trade with Egypt and Persia, India and China. One particular climatic benefit was the fact that the monsoon blows in one direction during one season and in the opposite in another. This facilitated sail but required that traders from the Persian Gulf lay over in Oman’s ports to wait for the directional change of prevailing winds. This brought wealth much as it did to other regions benefiting from accommodating monsoon traders such as Sri Lanka and the Malaccan states. Oman’s position between the Middle East and the Indian Ocean also benefited her. She traded down the east coast of Africa and eventually controlled the island of Zanzibar; one trade in which she flourished was of African slaves. You will be able to ‘read’ Oman’s trade history in material evidence such as the architecture of her ports and her lovely dhows, and in the polyglot of Arabs, Persians, Indians and Africans that comprises her coastal population.

Oman’s strategic location, however, was a mixed blessing for it encouraged invasion by powers that needed to control vital shipping lanes. Ancient Mesopotamians, medieval Arabs, sixteenth century Safavid Persians all controlled her coasts. Then came Westerners, first Portuguese traders followed by the British in the late eighteenth century, whose involvement was dictated, as it was in Central Asia, by the desire to protect routes to India. Although the opening of the Suez Canal threatened eclipse, Oman survived when oil was found in her territory, bringing British and later American companies to her shores.

If the history of Oman’s coasts is one of connectedness to the world then that of her interior has been one of isolation. This isolation was tempered at different times – by the domestication of the camel (c. 1000 BC) and the development of caravan routes that became increasingly important after the unification of the Arabs by Islam. The interior’s links to the world remained, however, tenuous. Parallels might be seen with Morocco in that in both countries isolation protected heterodox Islamic groups such as the Kharijites from the Caliph and at the same time encouraged internal tribal disputes – seen in the Kasbahs of Morocco and Oman’s citadels. For centuries, whereas Oman’s coasts were regularly visited by foreigners, the interior remained less cosmopolitan, and this is reflected today in its villages and citadels, the local markets, date plantations and incense tree forests, jewellery, dress and customs of these people today. The interior preserved religious traditions and gave birth to dynasties whose power resided in clan loyalty and (conservative) religious leadership. At times, like the Berbers of Morocco, tribal confederations would issue across the mountains to invade and control Oman’s coasts.

It is this unique polarity of isolation and engagement with the world that has flavoured Oman’s culture in such distinctive ways. This tour is designed to allow you to explore both Oman’s historic role in world trade and its preservation of customary society, and the interplay between these two very different identities.