The Story from the Turkish documents

Kanlisirt or “Bloody Ridge”, Korkudere or “Valley of Fear” are not names familiar to many Australians, yet they should be; these are the Turkish names for “Lone Pine” and “Monash Valley” – locations seared into the Australian psyche through our collective commemoration of the Gallipoli campaign. ANZAC Day recognises the ‘mateship’, camaraderie, and fundamental place Gallipoli holds for modern Australian identity, but typically (and perhaps understandably) has traditionally omitted the commonality of experience with Turkish soldiery. Two very timely and detailed new books by historian and broadcaster Harvey Broadbent fill this gaping lacuna in our understanding of the Dardanelles campaign.

Broadbent was provided access from 2003 onwards to the Turkish General Staff Military History and Stategic Institute archives – a treasure trove of primary sources on the Gallipoli campaign written by Turkish officers for the Turkish military command. Bar some analysis by the American military historian Edward Erickson, Broadbent’s translation and analysis of this material is unique. Broadbent has collated these primary sources and released them in two books: a scholarly reference work, Gallipoli: The Turkish Defence and Defending Gallipoli, The Turkish Story. This latter book provides Broadbent the vehicle to present the campaign in the form of a flowing narrative, offering an interpretation and understanding of the campaign on an almost hour-by-hour basis.

Gallipoli has never held the same significance for Turks 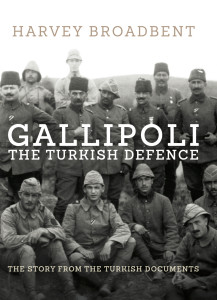 The insightful detail that Broadbent’s analysis provides is a must-read companion to the plethora of centenary commemoration books that have appeared over the last few years. Gallipoli has never held the same significance for Turks as for Australians or New Zealanders and this book partly outlines why: not least, the broader conflict of World War I, which the declining Ottoman state found itself drawn into, resulting ultimately in the dissolution of the Ottoman Empire. Broadbent’s presentation of the Turkish defences briskly outlines the strategic circumstances under which the campaign was fought and details the role of the German general who was the primary organiser of Peninsula defences from Allied attack. Whilst this is already well known to interested readers, the strategy to defend the Dardanelles, created by Commander von Sanders and implemented by the Turkish High Command, is presented by Broadbent in the broader context of the political and military circumstances in the lead-up to the 1915 invasion. His analysis further underlines how the Turkish victory and sacrifice at Gallipoli would be subsumed in the historical record by the greater horrors that engulfed the Ottoman state and Turkish peoples after 1918.

Broadbent breaks his narrative into six primary stages. He begins with the initial Ottoman defence of the Dardanelles and Gallipoli, with Turkish military dispositions clearly illustrated by copies of original maps, providing the reader with an understanding as to why the German and Ottoman high command made their tactical and strategic decisions. This is followed by the bulk of the book which is a startling presentation of the Ottoman response to the initial Allied landings, with many firsthand accounts of events written by the Turkish soldiery of their experience of the invasion. Broadbent follows up his eagle-eyed account of the landings with an exhaustive examination of the bitter fighting that ensued during May 1915, followed by an equally comprehensive unpicking of the August Offensive of 1915, followed finally by an account of the Allied Evacuation. Clear maps and italicised summations of the same events described from the Allied perspective, further enhance Broadbent’s analysis.

A triumph of historical research 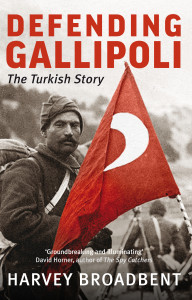 Defending Gallipoli, The Turkish Story is a triumph of historical research and while the author expects a degree of familiarity with the primary events of the Gallipoli campaign, the strength of Broadbent’s approach is to remind us that the sacrifices made on the Aegean shore in 1915 were sacrifices shared between all of the nationalities fighting for the Dardanelles: Turks, Australians, New Zealanders and British alike. While Gallipoli is revered as a foundation stone in the creation of the modern Australian identity, the events that took place there are significant to the historical narratives of other nations, not only Australia and the Commonwealth, and Broadbent’s books recognise this. Any reader interested in understanding Gallipoli is urged to purchase this book and benefit from Broadbent’s unique insights to the tragedies and shared sacrifices of the Gallipoli campaign.

Harvey Broadbent is a leading authority on Turkey and its history. He is the author of Gallipoli, the Fatal Shore (2005), The Boys Who Came Home, Recollections of Gallipoli (1990/2000) and Voices of the First World War (2014). In a 23-year career at the ABC, he produced four documentaries on Gallipoli for ABC Television and several radio features. Since 2005 he has been using his expertise as a Senior Research Fellow and Associate Professor at Macquarie University, where he directed the Gallipoli Centenary Research Project, a partnership between the university, the Australian War Memorial and the Australian Research Council.

From 1992 to 2006 Harvey was the tour lecturer on ASA’s Turkey: Ages of Anatolia program