Hereford Cathedral’s great Mappa Mundi, Europe’s largest medieval map (1.5 x 1.2 metres) was created in 1300. This extraordinarily detailed world image, centred on Jerusalem and incorporating the three known parts of the world – Asia, Europe and (North) Africa – drew upon manuscript diagrams as well as an encyclopaedic tradition harking back to great medieval gatherers of knowledge such as Isidore of Seville (c. 560–636) and works of art such as the Pentecostal tympanum at Vézelay. In both the Mappa and the tympanum Christ, in judgement in the Mappa and sending out the Apostles to evangelise the world in the tympanum, is lord of both space and time. These depictions of the known (and unknown) world, much of which is inhabited by fantastic peoples and beasts, reminds one of Jonathan Swift’s marvelous poetic quip:

“So Geographers in Afric-maps
With Savage-Pictures fill their Gaps;
And o’er uninhabitable Downs
Place Elephants for want of Towns” 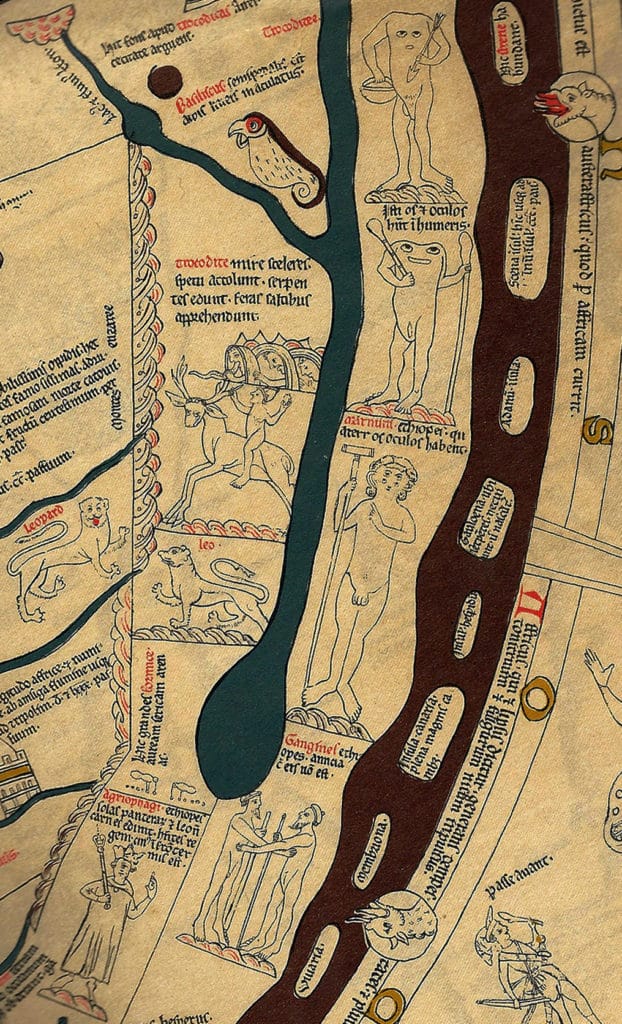 Despite its fantastic visual embroidering, the Hereford map stands at a pivotal point in man’s ongoing fascination with the known and unknown world; it was, for example, created just a few years after Marco Polo is thought to have dictated his account of his travels to Rustichello da Pisa, and at a time when King Dinis of Portugal (r. 1279-1325) initiated an export policy that ultimately led to the Portuguese ‘age of discovery’. That the creation of the Mappa is coeval with such events is not fortuitous. From the decline of the Roman Empire until the early 11th century, Europe’s population had shrunk. This decline, probably the result of a mini ice age, was reversed when the temperature began to rise again. Thenceforth Europe experienced a population explosion and, in the 13th-century, one of the greatest economic booms in history. Hitherto the victim of invasion – by so-called barbarians, as well as Magyars, Vikings and Muslims – Christian Europe now went on the offensive, for example through Crusades in the Holy Land, Islamic Spain and in pagan Prussia and (what are now) the Baltic states. This new spirit of adventure was also manifest among Europe’s peoples in an explosion of pilgrimage, to the Holy Land, Rome and Santiago de Compostela; a number of scholars have remarked that medieval pilgrimage was as much about curiosity as piety.
It may be, as Bruce Chatwin argued in The Songlines, that humans have deep within them an almost ‘genetic’ desire to travel to the unknown, from man’s emergence from Africa, to Greek colonization, the Barbarian invasions, the Age of Exploration, 19th-century Imperial and modern mass migration, and even to NASA’s journeys beyond our own planet. The Hereford Mappa Mundi symbolizes this spirit of adventure.

ASA visit the great Mappa Mundi on its Great Libraries and Stately Homes of England 2018 and 2019 tours.

Below are a couple of excellent short documentaries on Hereford’s Mappa Mundi on YouTube: