Pharos: the Greek city on a Croatian Island Greek city on a Croatian Island  –  The Greeks have a long tradition of travelling to new lands in pursuit of trade or a better life. In antiquity, Greek settlers founded a network of cities all around the Mediterranean and Black Seas. By the fourth century BC, these colonies stretched from Spain to Syria and from Libya to the Ukraine. As they relied on the sea for connections with other Greeks, these colonies mostly stuck close to the shore – “like ants or frogs around a pond”, as Plato once quipped.

Some of these colonies went on to become world-famous cities, such as Marseilles, Naples and Syracuse. Others are less famous today, but their stories are no less fascinating. ASA’s Adriatic Journey visits several former Greek colonies on the Croatian coast. One of these colonies has a particularly interesting history.

The town of Stari Grad sits on the beautiful island of Hvar. Today Stari Grad is a quiet seaside settlement of 2000 people. Many of its cobblestone streets and stone buildings date from the seventeenth and eighteenth centuries. But its origins go back to 385 or 384 BC, when a group of Greeks from the island of Paros founded a colony there, which they cheekily called Pharos in memory of their homeland. The colony didn’t get off to a great start. One of the difficulties Greek colonists regularly faced was that there were often people already living in the places they colonised. As you might expect, the natives weren’t always pleased to see the new settlers. And one year after Pharos was founded, we’re told that the colony was attacked by 10,000 Illyrians (the native inhabitants) from the island and the mainland. The Greeks managed to repel this force with help from another Greek colony on the nearby island of Vis. The colony of Pharos continued.

We don’t know much about what happened to Pharos over the next 150 years. But the next time we hear about it, the relationship with the Illyrians had improved considerably. A man from Pharos with a Greek name, a certain Demetrios, had become a commander of an Illyrian army. According to one source, he even ended up marrying a former Illyrian queen. In the 220s BC, Demetrios and the Illyrians started attacking the Romans’ allies in the region. That triggered a war with the Romans, which ended with a Roman victory. Demetrios fled to Macedon and Pharos was destroyed. But the town was rebuilt, became an ally of Rome, and continued. 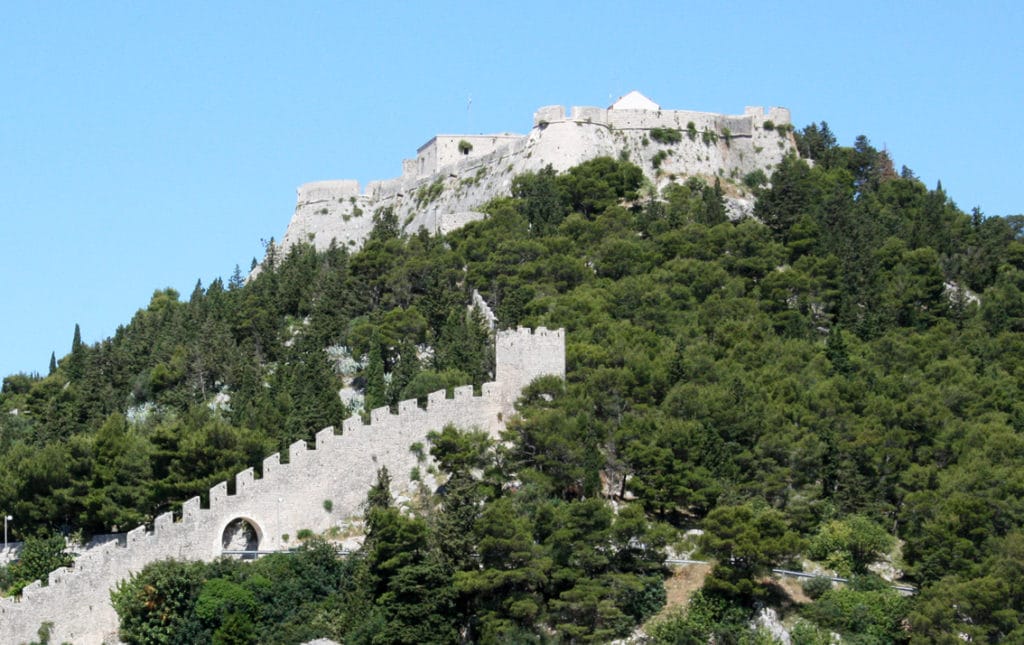 A number of traces of the ancient town remain. ‘Stari grad’ in Croatian means ‘old town’. A small section of the ancient city has been excavated, including the foundations of the city wall and a street. Another section of the city wall can be found in the basement of one local’s home. The foundations of two watchtowers can be found on nearby hills, designed to alert the Greeks about approaching threats. These remind us of the danger these colonists once faced.

But the most important remains are outside the town, in the plain where the Greek colonists grew their crops. The Stari Grad Plain was protected by UNESCO in 2008 because its use today is almost unchanged from its use 2400 years ago. Many of the dry-stone walls between the fields follow the property boundaries established by the Greeks when they divided the land between them. Today’s roads still follow the same paths that were established by the Greeks. And many of the farms in the plain grow the same crops that the Greeks planted when they arrived – including the typically Greek crops of olives and grapes.

From the air, the plain looks like a checkerboard, as the Greeks divided the land into 75 rectangular blocks, each of equal size. This was typical in the Greek colonies, where colonists were keen to ensure that the land was divided fairly between them. Click here for a detailed map.

There’s a great sense of history on the island of Hvar – after the Greeks and Romans, others came and also left their mark on the island. The Venetians in particular have left a legacy of houses, churches and fortifications. But what makes Hvar particularly fascinating to me is the continuity. Travelling through the Stari Grad Plain, on the same roads that the Greeks used, between farms where the same activity has been practised for 2400 years, is what brings history to life.

We visit the above sites on our two night stay in Hvar. For more information on our tour, visit: An Adriatic Journey: from Trieste to Dubrovnik.