Dr Chris McAuliffe is a Professor of Art at ANU and a freelance curator, critic and art consultant. Dr McAuliffe took a BA Hons and an MA at the University of Melbourne and a PhD at Harvard University (1997) with a dissertation on contemporary American art. Chris taught art history and theory at the University of Melbourne (1988-2000), including conducting three ASA tours of the New York art scene. In 2011-12, he was the Gough Whitlam and Malcolm Fraser Visiting Professor of Australian Studies at Harvard University where he staged ‘Tinnitus’, a symposium on art and rock’n’roll.

Chris has published widely on both historical and contemporary art with a focus on Australia and the USA. His research focuses on the relationship of art with everyday life and popular culture, including sport, rock music and suburbia. His books include Art and suburbia (1996), Linda Marrinon: let her try (2007) and Jon Cattapan: possible histories (2008). He has also published in academic journals and exhibition catalogues on American pop art, Abstract Expressionism, earthworks art and minimalist sculpture. He has been a regular commentator on ABC radio and on ABC TV’s ‘Sunday Arts’.

Chris has extensive experience in the art museum sector, ranging from community-based contemporary art spaces through to the Council of the National Gallery of Victoria. From 2000-2013 he was Director of the Ian Potter Museum of Art, the University of Melbourne. Among the exhibitions he has curated are ‘After the age of Aquarius: American art in the 1970s’, ‘Game on!: art and sport’, and ‘The Shilo project’, an exhibition on Neil Diamond. In 2013, he was curatorial consultant for the major exhibition, ‘America: painting a nation’ at the Art Gallery of NSW, which featured works from museums in Los Angeles, Philadelphia, Houston and Chicago. In 2006, Chris initiated the Basil Sellers Art Prize; a biannual award for contemporary art on the theme of sport, one of the richest in Australia.

Chris has travelled extensively in the USA, having visited 26 of the 50 states (and counting!). He first moved to Boston in 1986 and has lived there and in New York for a total of five years. He has undertaken field research in the Southwest (California, Nevada, Utah, Colorado, New Mexico), exploring earthworks sculptures, and is an aficionado of the regional cuisines of the USA.

Chris McAuliffe’s research interests include 19th and 20th century art (Australia and America) with a focus on earthworks (Robert Smithson), abstract expressionism (Jackson Pollock), art and sport, art and rock music. He is currently a partner in the ARC-funded research project ‘Fringe to Famous’, which examines the crossover between ‘alternative’ and ‘mainstream’ Australian cultural production since the 1980s.

Chris first joined ASA in 1996 as a lecturer for the biennial credit course run in association with the University of Melbourne (1996-2000) which explored the New York art scene.  Most recently he has led: 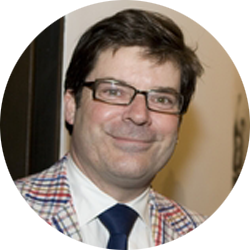