When it comes to Art & Design, Chicago offers more than Frank Lloyd Wright The Chicago Public Art Collection includes more than 700 works of art exhibited in over 150 municipal facilities around the city, such as police stations, libraries, and CTA stations. The Collection provides the citizens of Chicago with an improved public environment and enhances city buildings and spaces with quality works of art by professional artists. 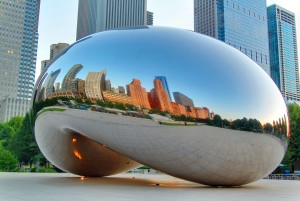 Cloud Gate at Dawn is probably one of the most recognisable public works of art in Chicago. The sculpture is by Indian-born British artist Anish Kapoor and is the centrepiece of the AT&T Plaza in Millennium Park within the Loop community area of Chicago, Illinois, United states. The sculpture is nicknamed “the Bean” because of its bean-like shape. Made up of 168 stainless steel plates welded together, its highly polished exterior has no visible seams. 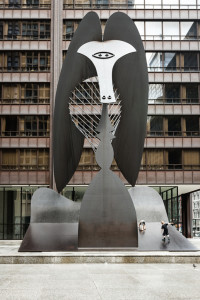 Chicago Picasso stands 50 feet tall and weighs over 160 tons. The Chicago Picasso in Daley Plaza is much more than just artwork to Chicagoans. the untitled Picasso sculpture that originally sparked controversy in the city has now become one of Chicago’s most famous sculptures and beloved icons. The Chicago Picasso was commissioned in 1963 by the architects of the Richard J. Daley Center to anchor the plaza on the east side of the building. Most public art in large cities at this time was calm and stoic, mainly depicting historical figures, but in the 1960s, architecture in American cities began to reflect the many cultural changes taking place throughout the country. The Daley Center’s architects decided to commission the renowned Spanish artist, Pablo Picasso, to create a monumental sculpture for their plaza. 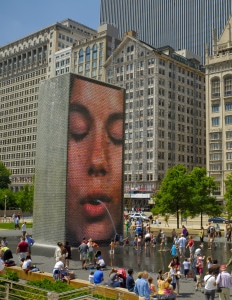 Crown Fountain in Millennium Park, designed by Spanish artist Jaume Plensa, is a major addition to the city’s world-renowned public art collection. The fountain consists of two 50-foot glass block towers at each end of a shallow reflecting pool. the towers project video images from a broad social spectrum of Chicago citizens, a reference to the traditional use of gargoyles in fountains, where faces of mythological beings were sculpted with open mouths to allow water, a symbol of life, to flow out. Plensa adapted this practice by having faces of Chicago citizens projected on LED screens and having water flow through an outlet in the screen to give the illusion of water spouting from their mouths. The collection of faces, Plensa’s tribute to Chicagoans, was taken from a cross-section of 1,000 residents. The fountain’s water features operate during the year between mid-spring and mid-fall, while the images remain on view year-round.

Chicago Cultural Center’s Louis Comfort tiffany art glass dome is the largest tiffany glass dome in the world. The magnificent translucent dome, 38 feet in diameter and made of Tiffany Favrile glass, is cut in the shape of fish scales. At the top of the dome are the signs of the zodiac. Now lit electrically, it was originally illuminated by sunlight. At the base of the dome is a quotation from the British author Joseph Addison. The dome glass, lighting fixtures, wall sconces and chandeliers were made by the Tiffany Glass and Decorating Company of New York. The supporting frame was constructed by the Chicago ornamental Iron Company. 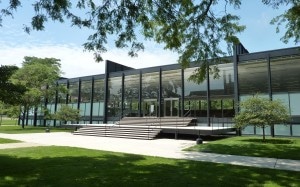 Crown Hall, home to the College of Architecture at IIT, is a modern masterpiece that time magazine calls “one of the world’s most influential, inspiring and astonishing structures.” Designed by Miles in 1956, Crown Hall cohesively represents his architectural concepts and theories in their most complete and mature form. A national Historic Landmark, Crown Hall is a straightforward expression of construction and materiality, which allows the structure to transcend into art. Its refinement and innovation place it

among the most distinguished buildings of its age and define its importance in the history of architecture.

Chicago’s tribune, in 1922, hosted an international design competition for its new headquarters. The brief was to design “the most beautiful and distinctive office building in the world”. The competition worked brilliantly for months as a publicity stunt, and the resulting entries reveal a unique turning point in American architectural history. The winner was a neo-Gothic design by New York architects John Mead Howells and Raymond Hood, with buttresses near the top. 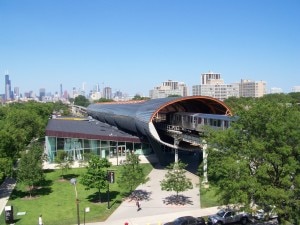 Chicago has the third busiest and second longest rail mass transit system in the country. It is known as the “L” for “elevated” because most of the system is on an elevated structure. The train station at the Illinois Institute of technology uses curved steel beams to form a tube which muffles the noise of the “L” as it passes through the campus. 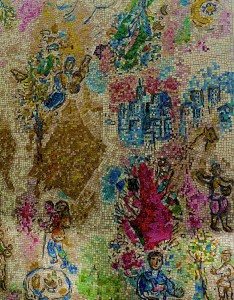 Underneath the tube is the McCormick tribune student Center designed by celebrated architect Rem Koolhaus.

Composed of thousands of inlaid chips in over 250 colours, Marc Chagall’s mosaic artwork The Four Seasons portrays six scenes of Chicago. It features a vocabulary of images informed by the artist’s Russian-Jewish heritage and found in his surrealist paintings such as birds, fish, flowers, suns and pairs of lovers. Chagall maintained, “the seasons represent human life, both physical and spiritual, at its different ages.” The design for this mosaic was created in Chagall’s studio in France, transferred onto full-scale panels and installed in Chicago with the help of a skilled mosaicist.