Sitting imperiously on the top of Monte Camico, Agrigento commands enviable views across the broad coastal plain towards the Mediterranean Sea. Led by Aristonous and Pistilus, the Rhodian and Cretan settlers who left Gela in 581BC occupied a perfect site. The high, steep mountain accommodated the town acropolis, while the ridge ringing the town to the south served as natural walls. At the town’s feet was a vast fertile plain, watered by the tranquil rivers Hypsas (mod. Fiume de Sant’Anna) and Acragas (mod. Fiume di San Biagio), from which the ancient city took its name.

The colony’s early history followed the common patterns of colonisation. The local Sican people were dispossessed of their land. Relations with Gela were cut and the city instituted its own constitution and government. During his reign, the tyrant Phalaris (ca 570-549BC) extended the town’s territories east to the Licata promontory. In 480BC, Acragas joined its mother-city in defeating the Carthaginians at Himera, further extending its wealth, power and prestige. Its sacking by the Carthaginians in 406BC instigated a period of decline that was not fully arrested until the Roman late Republic period.

Acragas’ heyday was the fifth century BC, when the city reached its largest size, and a population of ca 200,000 inhabitants. It was also the period of greatest prosperity, based on olive groves, vineyards and horse breeding. The poet Pindar, admiring its magnificent and unique vista of temple architecture, described it as the most beautiful city of antiquity. Stretched out along the escarpment, the now goldenhued, limestone-stucco temples gleam in the Sicilian sunshine. Fleeting glimpses, as the modern highway winds through the valley, enthral the visitor; just as the first sight did ancient travellers coming by ship from the eastern cities.

Now covered by the modern city, archaeological investigations on the ancient acropolis have revealed temples dedicated to Zeus and Athena, today the cathedral of S. Gerlando and the church of S. Maria dei Greci respectively. Archaeologists believe the agora or marketplace was on the site of the archaeological park’s current car park to the east of the temple of Olympian Zeus. Large-scale urbanisation did not begin until the fifth century BC. The street plan, largely anticipating the typical Hippodamian grid pattern, had six main avenues seven metres wide running east-west, and many minor streets traversing north-south. The residential quarters spreading down the side of the hill to the lower city belong largely to the Hellenistic- Roman period. The town’s defensive walls, following the natural terrain, surrounded the lower town.

There are few classical sites that can compare with the archaeological splendour that confronts the tourist visiting Agrigento. An avenue of Doric temples, some in ruins, others erect, proudly boasting their architectural grandeur, overwhelms the senses. A building program of this proportion required enormous civic wealth and stability. It was undertaken during the fifth century BC, when the city was at its wealthiest, and ceased with the Carthaginian sacking of 406BC.

Today, only four of the ten temples can be visited with comfort. Heading eastward from the carpark along the Strada Panoramica,
the first building we encounter is the ruins of a large temple dedicated to Heracles. Dated to ca 500BC, it is the oldest of the extant buildings. Built fifty years later, and also badly damaged, is the temple of Hera, perched last along the escarpment. The signs of fire suggest the damage occurred in 406BC when the city fell to the Carthaginians. The remains of a sacrificial altar at the front of the temple (eastern face) reminds us that the Greek temples were the dwelling-places of the gods, and not places of worship. Worship was conducted outside. 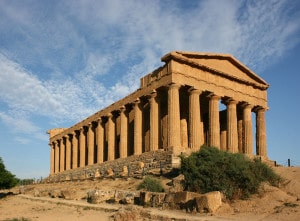 Ironically, Temple F, the best preserved temple perhaps in the whole Greek world, and one which rivals the Athenian Hephasteion, remains anonymous. Fifteenth century tradition renamed it the Temple of Concord, and newly-wed Agrigentians visit the temple for good fortune. Erected ca 430BC, the temple employed the earliest use in Sicily of columns with an inward slant and a curved platform, already used on the Parthenon in Athens.

West of the carpark lie the remains of the imposing temple of Olympian Zeus. Begun in 480BC, it was still incomplete when the Carthaginians ravaged the city in 406BC. The building was never completed, and subsequent damage by invaders, earthquakes and local quarrying, took its toll. It is undoubtedly the largest Doric temple known in antiquity – its floor-space of 113.5 x 56 metres exceeded the next largest temples at Samos and Ephesos – and one of the most original Greek temples of antiquity. Uniquely, the temple architect abandoned the traditional temple peristyle. Instead the exterior columns (seven on either end and fourteen along the sides) were set in as part of the temple wall. Furthermore, while they were carved as semi-columns on the outside, inside they were set as flat pilasters. The cella was divided into three aisles, with two rows of twelve square pilasters supporting the expansive roof-line. Another unique feature was the gigantic, male figures (telamones). Each over seven metres tall, they were positioned into the exterior wall on platforms between the columns. With their arms above their heads, they appear to be supporting the roof.

The temple complex served a number of purposes: it expressed the religiosity of the ancient city; it broadcast the city’s sense of civic self importance; and, bearing in mind Acragas’ location on the western half of the island, it represented a statement of Greekness in the native and Phoenician heartland. To this end, the sculptural program employed on the Olympieion’s pediments was familiar to the Greek world: the east pediment showed the Olympian gods fighting the Giants; and the west, the capture of Troy. While alluding to the victory over the Carthaginian forces at Himera, both symbolically emphasised the victory of Greek civilisation over barbarism.