The Crafts of Venice

Venetian glass – Image by Christopher Wood. Glass is handmade on the island of Murano according to specific ancient techniques and recipes that have been passed from generation to generation of master glassmakers.

One of the most fascinating aspects of Venice is its rich craft tradition. The glories of Venice’s unique art and architecture are well known but these are complemented by an extensive and equally brilliant group of artisan products.

The best known of these is hand-worked glass. This craft was developed by glass blowers from Constantinople after the Venetian invasion of 1204 and was further enriched by refugees from the Ottoman conquest of the Byzantines in 1453. Murano glass became prized throughout Europe for the richness of its colour and for its sparkle. Refinements in the craft reflected developments in glass research into metallic oxides, which intensified the hues, and additives, which enhanced the sparkle.

It was the Murano blowers who first developed clear sparkling glass they called ‘cristello’, the model for crystal today. The trade in glass so enriched the economy that the families of master blowers were permitted to marry into the nobility and their products were so prized their craft secrets were protected under penalty of death. Furnaces of the original glass families still produce glass masterpieces today. The lace of Venice, centered on the island of Burano, is equally prized. Knowledge of lace-working techniques was brought to Venice by artisans captured from Milan during the conflicts of the 1400s. Lacework in Venice reached its high point during the 18th and 19th centuries, when Burano lace competed with the finest Belgian products. Master makers can still be seen in the Burano workshops today.

During the 1400s brocade textile production was largely dominated by Venice, 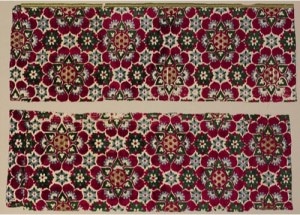 the first state to establish a charter of quality control. The silk weavers and embroiderers enriched the coffers of the Venetian state, as demand for their unique skills spread through trade. New colour dyes and the secrets of mordant dyeing brought from India gave Venice a virtual monopoly. The designers of the Rubelli workshops and the historic Bevilacqua studio with its 18th-century looms, continue to export silks to palaces and grand theatres around the world.

Venice’s grand palazzi and museums, filled with dazzling examples of sumptuous brocade, delicate lacework, exquisite costumes and fine Murano glass, commemorate artistry and skills refined over long centuries. Today in the workshops of Venice, artisans continue to draw on the traditions inherited from their forebears, to create new treasures for the modern world.